Colorectal cancer, a leading cause of cancer-related death in Western countries [1], is largely preventable if precursor adenomatous polyps are detected and excised before becoming malignant. A colonoscopy detects them by inserting a flexible video camera in the colon. Recently there has been increased interest in Computed Tomography Colonography (CTC). CTC is a less invasive technique which uses computed tomography imaging and advanced visualisation software to enable a radiologist to simulate conventional colonoscopy.

In CTC, the patient is scanned twice, once prone and then supine. When the patient is repositioned a polyp remains fixed to the colon surface while other material moves thereby enabling, in theory, the radiologist to differentiate between polyps and residual stool. However, because the colon itself undergoes considerable deformation at the same time, matching corresponding points on the colonic surface before and after repositioning is difficult. Now an interdisciplinary team led by David Hawkes (UCL), Steve Halligan (UCH) and Greg Slabaugh (Medicsight PLC) is developing a technique to solve this problem using, among other things, the Ricci flow from differential geometry. This work was presented at an Open for Business day at the Isaac Newton Institute during the 6-month programme Inverse Problems in 2011 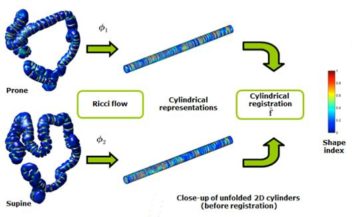