#36 “You don’t need anybody’s permission to be a great mathematician”, an interview with Dr Nira Chamberlain

In episode #36 of Living Proof, Dan Aspel and Christie Marr speak to Dr Nira Chamberlain. Dr Chamberlain has recently joined INI’s management committee, and his history up to this point is as interesting as it is inspiring.

Fresh from a two-year stint as the President of the Institute of Mathematics and its Applications he’s recently been awarded an OBE for services to Mathematics, he’s been named the “5th most influential black person in the UK”, “one of the UK’s most influential scientists”, and even “the world’s most interesting mathematician”. He’s got a fascinating story to tell about encouragement and discouragement along his journey to becoming a mathematician, and his involvement in the Black Heroes of Mathematics conference is of particular interest. There’s even time to discuss Aston Villa and “Goldilocks and the Three Bears” along the way.

00:00 – Introduction
01:05 – Welcome (using maths to solve “complex industrial and engineering problems”), recently vacating the presidency of the IMA
07:00 – Accolades, Stormzy and Lewis Hamilton
09:27 – “That is disgraceful!”
09:55 – Discouragement and prejudice: “you don’t need anybody’s permission to be a great mathematician”
18:25 – Being the linking point between the mathematical and industrial worlds
21:13 – “What is the probability of Aston Villa staying in the Premiership?” (it’s “0.02%”)
25:43 – Joining INI’s Management Committee
25:58 – All about the “Black Heroes of Mathematics” conference
37:45 – Working on the Queen Elizabeth aircraft carrier… “have you heard the story of Goldilocks and the three bears?” 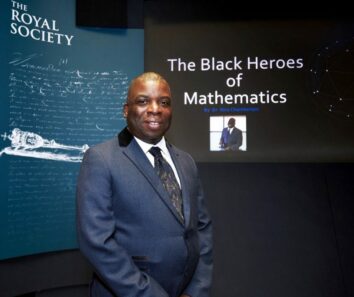 Dan Aspel and Christie Marr speak to Dr Nira Chamberlain, not only the “5th most influential black person in the UK”, but possibly “the world’s most interesting mathematician”.